Who are Anonymous – A Short History

Hmm, ‘Anonymous’ – Whenever there is a news report about the latest data breach it comes as no surprise to find the iconic guy fawkes mask staring back at us. Why, this has never been quite explained, but regardless we’re always somehow surrounded by the tales of their exploits and daring hacks upon both nation states and global companies.

Their reputation as an ever elusive international organisation of ‘ultimate-master-underground-computer-hackers!’ combined with some vague idea of a morale code certainly seems to have caught on with popular media.

But who exactly are they? and how did this all start anyway? It’s time to cobble together some shoddy internet research and present some scientific findings*

*We have no idea how factually acurate this is, but we carried out internet searches and combined our results together from what lots of other people said online so it must be true, right?

How do I join Anonymous?

So perhaps you don’t even care about the details. You’re a super master hacker and you need to join the brotherhood of hackers – immediately!

You’re all ready to dedicate yourself to these noble ideals and learn the ways of the craft. Except there’s one problem – how do you join this elusive secret group of underground hackers?

It’s time to clear something up.

Unfortunately, it doesn’t matter how inspired or committed you are, or even how good your mad computer skills are. You will probably struggle to join the ‘group’ known as ‘anonymous’.

As there really isn’t some centralised hacking group called anonymous, it’s less of an organisation, and more of an idea or a concept concept.

But what about incident ‘X’ or thing ‘Y’ that happened and ‘anonymous’ said they did it. “That’s proof isn’t it?” you cry. Well maybe, lets take a look and see how this idea morphed and grown over time into what we know and associate with the name today.

As with all good things on the internet. Where better to start than 4chan, the popular “English languge image board website” according to wikipedia though that description might not quite do it justice. While on a surface level the website may be nothing more than a bunch of dudes posting in a forum it’s reputation is certainly something more. It could easily take a whole other article to discuss the site entirely but 4chan often proves to be the origin of many infamous online pranks and jokes such as their beloved pepe the frog below (which was somehow declared an internation symbol of hate 2 years ago) 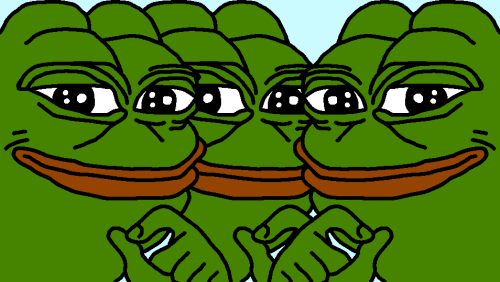 While the original forum simply revolved arond anime, as the site grew in popularity, it soon spread to cover a variety of different boards containing different content. Probably one of the most notable aspects of the forum was the ability to post anonymously. Unlike most forums which require a username and login to post, 4chan allows any user to simply go ahead and post, something which led to users simply referring to one another as ‘anon’.

This is often quoted as the likely the origin of the group name – anonymous.

Users quickly developed a taste for unusual humour posting images based on its own bizarre culture and in-jokes.

From here, this bunch of self professed autistic kids, loners, weaboos and geeks would go on to shape the internet, creating the meme and even uniting together to do this crazy new thing called ‘trolling’.
One fo the earliest instances of this came in 2006, when users swarmed onto popular game of the time Habbo Hotel (truly the golden age of gaming), with the goal of wreaking havoc. The players began to form a wall to surround the hotel pool and quoted that the pool was closed ‘Due to AIDS’ and other good reasons. – it was ‘serious business’, as the joke went. 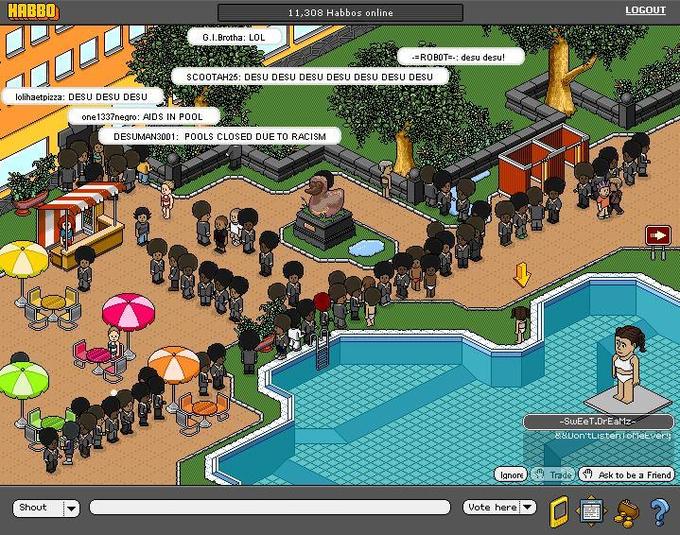 This was an early demonstration of users ability to group together to great effect online, if for a suitably ridiculous purpose. When asked what they were doing or where they came from they would dutifully followed the newly found 4chan culture by concealing the identity of the site and not saying where they’d come from, in true Rule #1 of fight club fashion.
Instead users would often instead pretend to be all sorts of things, one day they’d pose as being from a rival website, next they’d be undercover cops or some shadowy secret society. After all, nobody had heard of them, they could pretend to be whatever they wanted.

But, where did the anonymous mask come from?

A year earlier, in 2005 a new film had been released called ‘V for Vendetta’ telling the story of an epic struggle against a powerful tyranic government. The hero of the film ‘V’  wore the iconic mask of guy fawkes as he fought to overthrow the goverment in slightly cooler fashion than his earlier predecessor. The powerful impact of this mask clearly had an effect on those who watched it and led to a resugance in its popularity.

In 2006 around the same time, a new joke started to appear on the site in the form of ‘Epic Fail Guy‘ – who the meme historians among us are probably familair with. A new thread spawned a comic like cartoon in which an anonymous user posted captioned images of a stick figure character desperately failing before inexplicably adorning the classic guy fawkes mask.

Exactly why the guy fawkes mask appeared has been lost to the mist of time and it’s probably not important anyway. What we do know is it’s popularity seems to have grown from there. If you were hoping for some great explanation, sorry. That’s about it.

The Next Step: Real life Protest

In 2008 with the site userbase still on the rise, 4chan did something unprecedented. They somehow persuaded their users to leave their basement strongholds and venture out into the unknown, something known as ‘outside’. On a cold February morning the protest began. Over 100 people arrived and amassed outside the Chruch of Scientology in Florida to protest against the organisation for its ‘restrictions of free speech’ and ‘cult’-like nature after a video of Tom Cruise discussing the church hit widespread news.

Sticking to conventional 4chan ways, users once again protected both their identities and that of the site. Most notably, members chose to wear the Guy Fawkes mask. Some say this was to suggest that Scientology was an ‘epic fail’ much like the meme, maybe they were inspired by the vigilante protest of the movie 2 years before, or maybe they just thought it looked cool.

Regardless, the mask was now synonymous with the group and would grow to be even more iconic as it was taken on as the symobl of the “Anonymous” movement.

The protest can certainly be seen as a turning point – The anonymous protest had been born. With it came a new age of the anonymous identity, focused on freedom, privacy and civil rights, they were no longer simply trolls…

While this may sound great, unfortunately the rest of the 4chan site weren’t quite 100% behind them.

They were “Moral fags” as the rest of the 4chan community described them.

Eventually the hype around the scientology protest started to dry up, but the ‘anons’ were still hungry for more. The anonymous movement drifted between protests and projects backing those in favour of democracy and open information. During the Arab Spring revolution memebers attempted to DDOS government websites (Most notably that of the Tunisian Government) in support of the protestors while in reality this probably had little effect on the protest, if any. Clearly the idea of anonymous as a form of vigilante protest had taken hold.

Next came more protests such as that over Westboro Baptist Church, widely considered a hate group for its extremist stances on many groups of society with attacks on LGBT, religous and political groups and even US veterans. Things soon escalated once the church announced plans to picket the funerals of the Sandy Hook school shooting victims.

Once again, people took up the anonymous banner by attempting to bring down the ‘church’ group by shutting down their websites via DDOS and even obtaining and releasing private information about their members.

By now the idea of the ‘anonymous’ protest was in full swing, more DDOS atttacks and information breaches soon followed.

Anonymous was no longer about standing out in the cold protesting, it was time for some hardcore hacking. While some seem to believethese attempts were carried out by large amounts of members these attacks oare usually solo endeavours or at the very least conducted through a strong and tight-knit team working closely together.

While there may be no official ‘Anonymous’ group there have been many groups which have gained notoriety through claiming their representation.

One hacker group that is often confused with the ‘Anonymous’ name is LulzSec. However unlike the generic anonymous brand, LulzSec really was an actual hacking group with an actual leader!

Lulzsec were formed in 2011 they went on a mad spree of attacks including hacking into The PBS Website, where they published the fake story seen below. This followed by the famous Sony Pictures data leak and ended with a successful DDoS attack on the CIA itself, taking the site down for over 2 hours. Unsurprisingly none of this worked out too well for them in the end.

Okay I’m done. So there we have it, sort of. That should just about bring you up to speed. Here’s a picture for you. Have a good day

Hi, I'm the guy who wrote the terrible piece you just read. Don't mind me though, I'm just your average dog browsing the internet.

The Layman’s Guide to Crypto